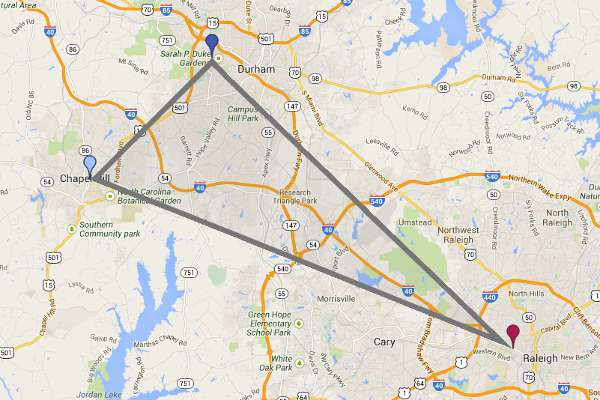 North Carolina’s Triangle actually has a longform, less popular name: The Research Triangle. This comes from its high concentration of STEM companies, particularly around the Research Triangle Park (or RTP.) With these important companies and a highly regarded university system, the Triangle is an important center of North Carolina’s economy and an awesome place to find a job! If you’re looking at relocating to the Triangle, these are some of the best places to start looking for a job.

Most server computers – aka the backbone of the internet – run on an operating system called Linux. There are many variations of Linux, and Red Hat’s is one of the most important and popular. Beyond their bread and butter, the company is a prominent player in distributed computing technology, with cloud-based application development and server software at the forefront. The company’s philosophy is centered around open source technology and its importance to technological advancement.

Red Hat is also an awesome place to work, with one of the best offices in downtown Raleigh, great benefits, and even a popular concert venue bearing their name!

There are many universities in the Triangle, but there are likely none like Duke, widely regarded as one of the best schools in the world. Combined with its health system, Duke employs over 36,000 people…so there are also few employers like it in the region. Its university has a stellar reputation for academics, and its flagship hospital provides some of the best healthcare in North Carolina.

London-based GlaxoSmithKline is the world’s sixth largest pharmaceutical company, and employs over 3,000 people at its RTP campus (also its North American headquarters.) An additional 800 are employed in Zebulon, a smaller town north of the RTP. Workers there enjoy walking trails, permanent food trucks, outdoor meeting spaces, and an open floorplan that encourages employee bonding and collaboration.

Are you looking to relocate to the Triangle? Tingen Construction builds custom homes in Raleigh, Durham, Cary, and beyond! We bring 28 years of experience to every home we build. Contact us today and let’s make your dream home a reality!